2021 will see Kenya’s Madaraka Day celebrated in the city of Kisumu. The June 1 event moves to a different location each year, and the newly-built Jomo Kenyatta International Complex Centre in the country’s third-biggest city will be this year’s venue. This should see a tourism boom in the city, while the new stadium could help young sports stars too.

The Story of Madaraka Day Celebrations

Madaraka Day is when thousands of Kenyans gather at the chosen venue to celebrate the country achieving independence in 1963. Songs, military parades, and a Presidential speech make this a day to remember. This year, Kisumu has been chosen and it is the perfect opportunity to open the new sporting venue.

2021’s version of the event will be even more special than usual, as the 2020 celebration was held on a virtual basis. Kenyans tuned in to watch the President and the military parade from State House in Nairobi, but this year that can travel to Kisumu to see it live.

This Year’s Plans and Tourism Opportunities

Nyanza regional coordinator Magu Mutindika confirmed that the 2021 event will be held at the Jomo Kenyatta International Complex Centre, even before the construction work was fully completed. Work started here in June 2020 and a change to the plans to make the stadium bigger has delayed the finish of the project.

Among the main guests for the day will be President Uhuru Kenyatta and Raila Odinga, who has become known as the President’s handshake partner. It is hoped that the large number of attendees expected to visit Kisumu will give the local hotel and tourism industry a boost. 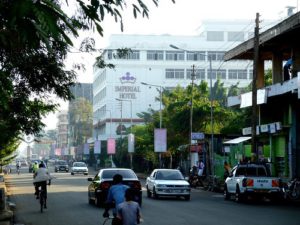 More About the Jomo Kenyatta Stadium

This new stadium represents a KSh415 million investment. It will have a 30,000-seat capacity and is expected to host soccer, rugby, tennis, and other sports once it is opened. The project was launched in 2020 when the President visited Kisumu. The original plans were for it to be built in the city center, but a lack of space there meant that it was moved out further.

One of the points made by Raila Odinga when he visited Kisumu at the end of last year was that it would provide additional employment opportunities for young people in the area. He also said that Kenyan sporting talent needs to be unlocked, and lamented the relatively few professional players from the country playing abroad.

Kenyan sports fans who want to bet on football games can do so online with a site like BetFromAfrica.com and place in-play bets or build combination bets. They don’t currently have any local heroes to support in Europe’s top teams, but there are some other options when we look at the games you can wager on featuring Kenyans around the world.

Among the best-known footballers to have begun their careers here is Victor Wanyama, who now plays with Canadian club FL Montreal after a successful spell in Europe that saw him become the first Kenyan to score a goal in the Champions League.

Michael Olunga has enjoyed a well-traveled professional career that has taken him to Europe, Japan, and China. At the start of 2021, the player who is known as The Engineer moved to the Qatari champions Al-Duhail in a deal said to be worth €6 million.

It is hoped that the new stadium in Kisumu and other projects around Kenya will help to produce the next generation of sporting talents. While the first event to be held here is a celebration of independence, there should be plenty of opportunities in the future for young sports stars to shine.