In some countries, we find some of the worst engineered bridges and roads that result in accidents. In hilly places, we have seen terribly engineered roads cause tragic accidents. but when it comes to Japan, engineering is in their DNA. Come to think of it, they have dominated the automobile industry with mega brands like Toyota, Nissan, Mitsubishi, Hyundai and many more despite being a very small country. 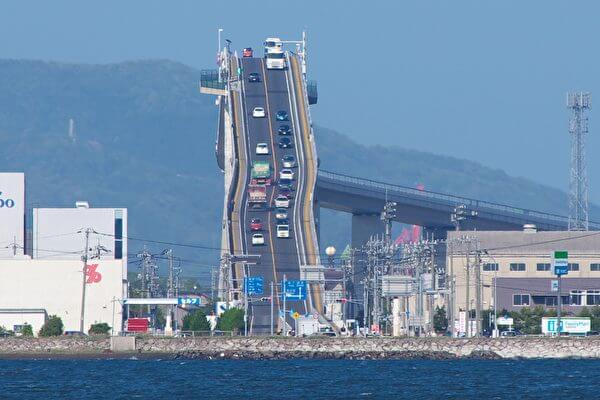 When it comes to infrastructure, Japan still leads the park specifically with their Ohashi Bridge. Some bridges offer relaxing scenic views, or at least a faster way to get to hard to reach spots. And then there is the Eshima Ohashi bridge in Sakaiminato, Japan.

The Eshima was completed in 2004 and was soon after dubbed the ‘Rollercoaster Bridge” because the rise in the middle gives driver’s the optical illusion that the cars ahead of them are driving off a cliff to a watery doom.

It’s one of the tallest rigid frame scariest bridge in the world. The bridge is constructed with a steep, 44-foot rise in the middle to allow shipping to use the river below. The concrete bridge connects the cities of Matsue and Sakaiminato and spans a mile across Lake Nakaumi.

While the bridge looks gravity-defying, engineers actually built it with only a 6.1 percent slope on one side and a 5.1 percent slope on the other. This means that for every 100 feet of horizontal distance the bridge extends, it rises 6.1 feet. It’s quite a gentle climb, but gives drivers the optical illusion that the road simply ends at the apex. Really the bridge isn’t that bad. For comparison in pure scariness, one bridge in Los Angeles has a dizzying 33 percent gradient. There are plenty of scary places to driver around the world.