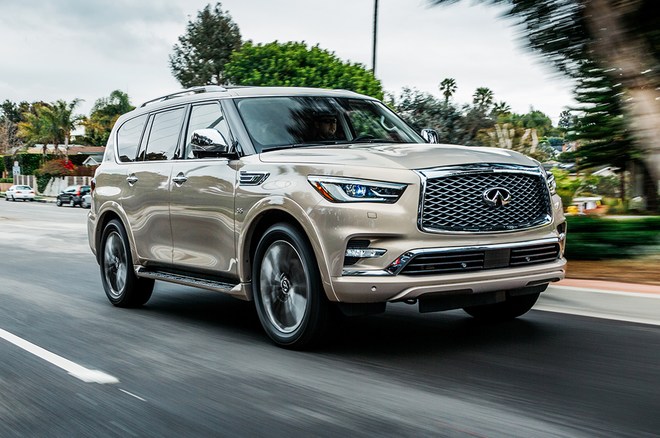 If it ain’t broke, don’t fix it. Or if you’re Infiniti: If it ain’t broke, give it a face-lift and some minor updates and keep selling it for a few more years. That’s apparently the philosophy the automaker followed when it designed the 2018 QX80, a vehicle that could’ve used a new generation after seven model years. Are the changes good enough to keep Infiniti in the full-size luxury SUV game?

When the first official photos of the new QX80 surfaced online, a few staffers struggled to spot the changes. The SUV gets headlights and taillights inspired by the QX80 Monograph concept, but other than that, the vehicle looked the same as the Nissan Patrol-based offering that’s been on sale since 2010.

That impression doesn’t change when you look over the spec sheet. The 2018 Infiniti QX80 continues to be powered by a 5.6-liter naturally aspirated V-8 making 400 hp and 413 lb-ft of torque and mated to a seven-speed automatic transmission.

In person, though, it’s much easier to tell Infiniti’s flagship SUV has gone under the knife. The new headlights are fresh and classy and make the front end look less like history.

The LEDs housed inside are also impressive, emitting a white beam with an incredibly sharp cutoff pattern. The lights look so alien radiating that you have to double-check that they aren’t laser headlamps.

The QX80 also gets a redesigned front fender vent and new wheels, which contribute to its more modern exterior look.

Climb (literally) inside the cabin, and you’ll notice new leather upholstery covering the seats. You might also notice new stitching throughout the cabin and better wood trim which lends the cabin an attractive, sophisticated look. The front buckets are also supremely comfortable and are complemented by cushy armrests. 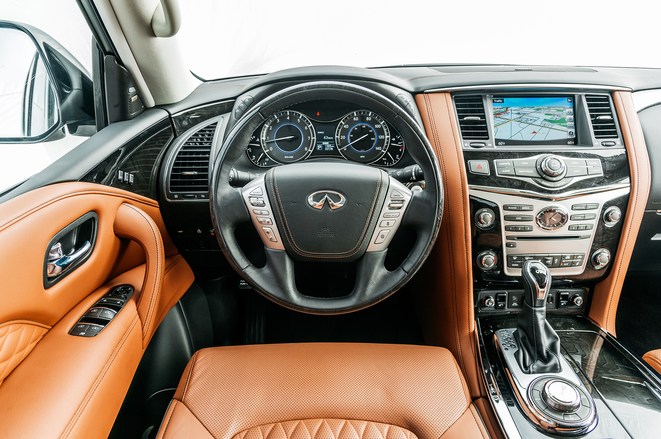 However, the QX80’s interior is much less impressive given its price point. The biggest ding against the QX80’s cabin is that it just looks dated. The finest leather in the world can’t make up for the QX80’s generations-behind touchscreen.

It is slow to respond to inputs and has low-resolution graphics. The analogue gauges and Nokia-esque in-cluster digital info screen don’t do the interior any favours, either.

Although the screens in the front portion of the cabin are old, Infiniti updated the dual headrest displays that come with the Ksh245,000 Theater package.

The displays increase in size to 8.0 inches and are higher-resolution, with an aspect ratio close to that of smartphones—meaning content played off your phone should look crisp and undistorted.

Speaking of what you can watch on those screens, second-row occupants can view what they want independently from each other, though they’ll have to fight over who gets the single HDMI input.

What you need to know about the QX80

The QX80 is the second biggest full-size SUV after Cadillac escalade extended wheelbase. No SUV of this size should be expected to handle like a sports car, but you also don’t want too much slop when you take a turn.

Although the QX780 is impressively quick, it feels much less happy in the corners. You’ll feel all three tons of the QX80’s curb weight when you take a curvy road.

Granted, few owners will ever take the QX80 to its handling limits by driving like a crazy person, the refreshed QX80 offers a reasonably comfortable and quiet ride, even with the optional 22-inch wheels and low-profile tires.

Infiniti added more sound insulation for 2018, including more material in the dash to dampen engine noise and sound deadening in the cargo area floor to help keep out road noise. 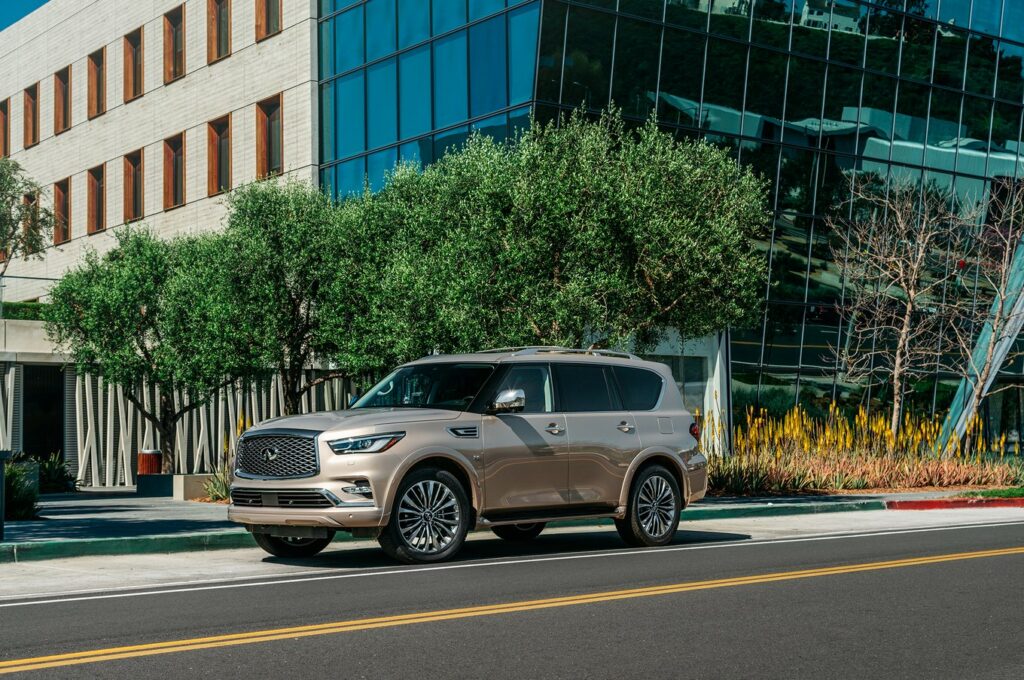 Parking the QX80 is made easier by a standard 360-degree camera system. Infiniti says the new QX80 can be had with up to five cameras. One of them points at a blind spot that’s particularly bad in large vehicles: the passenger-side front wheel.

This view lets you get close to a curb or check clearance between your vehicle and an object below your line of sight.

You can easily toggle camera views via a button in the centre stack. If you need even more visibility, Nissan’s Intelligent Rearview Mirror has trickled up to Infiniti, starting with the QX80.

The in-mirror display is part of the Deluxe Technology package and shows a video feed from a camera at the top of the rear glass to give you a wide-angle view that’s unobstructed by pillars.

Although it’s the least expensive option in the luxury SUV category, the QX80 doesn’t feel like it. The Infiniti isn’t up to the same level as the overachieving Ford Navigator, but I wouldn’t expect that from a product that costs KSH2 million less.

If you want the best luxury SUV on the market and are willing to pay top dollar for it, get the Navigator. But if you want a premium sports ute experience and can look past a few outdated features, the QX80 is a good value.