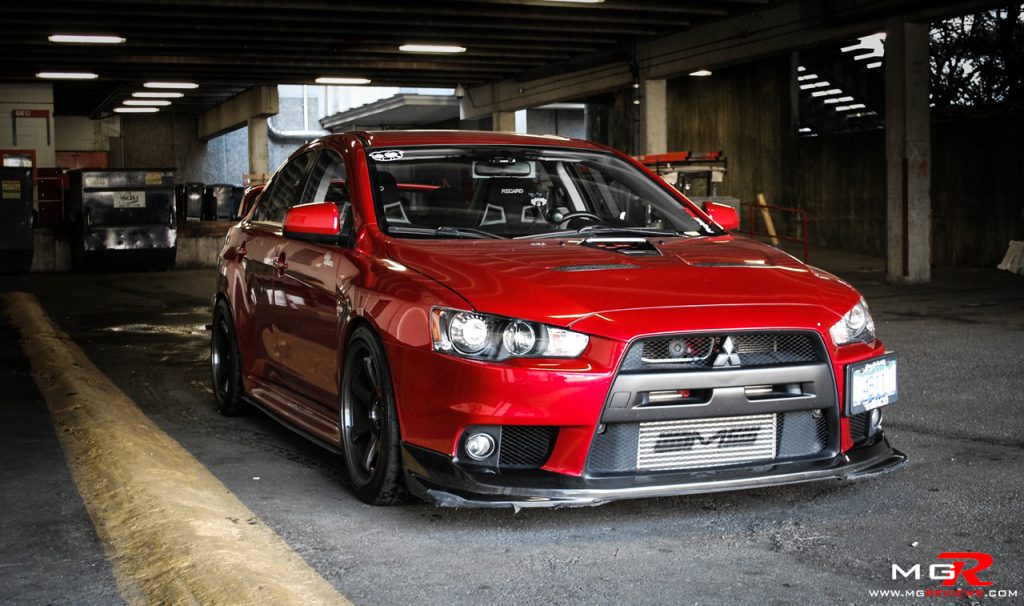 The Mitsubishi Lancer Evolution has been a pop-culture hero for Mitsubishi since 1992. Spanning some four chassis generations and ten distinct model numbers, with even a couple of notable half steps thrown in for good measure, the rally-bred small sedan has won motorsport titles as well as the hearts and minds of drivers the world over. I mean nothing else out there can handle corners like an Evo.

This all culminated in the release of the Evolution X in late 2007.

Sharper, wider, more powerful than all before it, the Evo X was modern and aggressive – the nose even mimicking the ultimate predator, the shark. And, like the shark, the X marked a peak in the evolution of the species – something so perfectly adapted to its environment that it was, for all intents, perfect.

That was the case in 2007, anyway, and while the deepest oceans are still wet, things up here have moved on a bit. The Lancer Evolution sadly has not.

Based on the GSR variant, the 2016 Final Edition Evolution X is basically the same as the car that arrived almost a decade ago. The badge on the back now calling out the ultimate irony – the Evolution that hasn’t evolved.

Mitsubishi has said that while the Evolution name may return in the future, the Lancer-derived performance sedan will not. For the car, as we know it, it is evolution’s final step to extinction.

I’m no stranger to the Mitsubishi Evo. I have cruised in a lightly modified Evo VIII MR and one of the first Evo X MRs to arrive in Kenya back in 2009. Both saw their fair share of motorkhana, hill-climb and circuit-based competition success, not to mention a bit of late night outer-urban shenanigans.

Back then (before kids) the iPhone had just arrived (I still did not have a phone) and we had only been subjected to one movie (The gods must be crazy).

A simpler time, but a fun time. Since then to now, nothing has changed. Really. Nothing even with the final edition X.

The interior layout of the X has held up well considering its age, but the hollow plastics and basic components don’t make it feel special in any way.

Yes it’s based on a Lancer, but this is the last one – surely a bit of Alcantara or carbon weave could have been specified?

An Evo signature, the front Recaro seats are comfortable and tight, offering excellent lateral support (trust me, you’ll need it), holes to fit harness straps and some nice red stitching on the leather panels.

They enforce a good driving posture, with a straight back and good positioning, plus they include two-stage heating.

The leather steering wheel and gear shift knob paired with aluminium pedals complete the ‘driver-centric’ elements of the cabin.

While looking at the inside, the rear bench offers acceptable room and comfort for two adults. The centre arm-rest is good but there are no air vents, nor is there access to the boot.

To help with weight distribution, the Evo’s battery, AYC (Active Yaw Control) pump and even the windscreen washer unit have been moved, along with some bracing, to the cavity behind the rear seat.

This results in a small (323-litre) cargo area that is annoying to access via the little push-button nipple on the back as well as heavy to open with the giant bookshelf spoiler on the top.

To commemorate the Final Edition, each of the cars produced receives special floor mats, badging and a little plastic plaque on the lower console.

In a way it matches the rest of the interior, looking more like a Mr Minit special than a celebration of an icon.

You also get the 18-inch BBS wheels, Bilstein shock absorbers and Eibach springs from the MR version, as well as a smart, gloss black-painted roof.

The Downside of the evolution X

Possibly the worst inclusion inside the car, though, is the ultra-basic 6.1-inch touchscreen infotainment unit. Note that both ‘info’ and ‘tainment’ are questionable terms as there is no navigation, no nifty vehicle data, ordinary sound quality, clumsy Bluetooth connectivity and unreliable audio connection when using the USB port that Mitsubishi has done its best to hide in the glovebox.

There are better head units in other Mitsubishi models. Why use the worst one here? There is a reverse camera though. However, creature comforts have never been the Evo’s forte.

Fire up the trademark 2.0-litre turbocharged ‘4B11’ (by turning the key-like knob on the steering column) and you are again reminded that it is business-before-pleasure in the Evo, with a loud but not particularly pleasant combination of engine noise and exhaust note.

The five-speed manual gearbox is again more purposeful than it is smooth, but the gate is tight and shifts short and accurate.

Why five-speed and not six? When the extra ratio was introduced in the Evo VIII MR, the gearbox housing had to be the same size (to accommodate the 5-speed VIII RS) and so to make it fit they just reduced the width of each cog. Think of it as adding another lane to a freeway without eating up more real estate.

However, it was found that under heavy use, the heat buildup in the gearbox made the six gears less reliable than the five. So RS models and other key performance variants maintain the five-speed.

Cool story, you say, and great for those tarmac rally stages, but around town you find the car settles into fifth at around 80km/h – and for more relaxed driving, makes you want for the extra slot.

But an Evo isn’t really about relaxed driving.

The Evo is fast and fun, but thirsty and impractical. There is amazing technology and capability under the skin, but the materials and finish up top just sour the whole experience when you aren’t running at eight-tenths and above.

The Final Edition X really could have been a little bit more special, particularly as a sign-off to such a formidable generation of vehicles. It still ‘Evos’ with the best of them but as a complete package, the outside world has evolved beyond the car.

Sure it is not quite a woolly mammoth frozen in the ice, but given the car reached its evolutionary pinnacle some years ago it is now sadly time for the Lancer Evolution to call it a day.

Goodbye Evo. Thanks for the good times, and thanks for the memories. A true hall of Famer if there ever was one hehe.