In typical Suzuki fashion, the Swift Sport doesn’t match any of its rivals for power or torque output, but any true fan of hot hatchery knows that it’s not just straight-line speed that matters.

The figure you really have to know about the 3.9-metre long Swift Sport is its full weight: a measly 970kg, which is 80kg (or one average bloke) lighter than the old model, and equivalent to the two-door fabric-roof Mazda MX-5.

At the same time it’s much pokier than before, thanks to its new 1.4-litre ‘Boosterjet’ turbo engine shared for the most part with Suzuki’s Vitara crossover, producing a modest 103kW of power but a meaty enough 230Nm of torque.

The new electric power steering is very light but offers sufficient response from just off-centre and loads up at speeds well enough, but it’s the chassis tuning that grabs you, and the grip levels. Go into a sharp corner a little too hot, and the Swift just bites and turns in.

The suspension – struts up front with Monroe shocks, but a basic torsion beam at the rear – is tuned like a daily driver, with a nice spongy feeling over corrugations. But this doesn’t translate to a wallow-y feeling through corners: the body stays fairly flat, and directional changes are rapid.

It’s like a proper old-school hot hatch, nowhere near as stiff as a Clio. Because it doesn’t have adjustable dampers like the Polo, it’s a good call on Suzuki’s part to make sure it’s cushy enough for the urban roads. 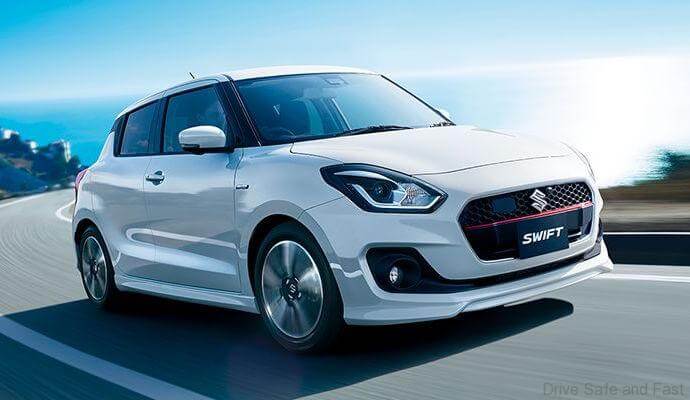 Another big improvement is the braking. The vented discs at the front and solid discs at the rear don’t have much mass to haul in.

What do you think of the design? There’s a bit of Renault about the new Swift, particularly in its curves and rear door handles. Suzuki has definitely played up the cuteness. Sporty design accoutrements on this range-topper include an angrier nose, twin pipes in an edgy black diffuser, black-and-silver alloy wheels that look pinched from Skoda, and a spoiler.

Hot-hatch fans will well know that the Swift has a strong legacy in the Junior World Rally Championship.

Inside the cabin is a new multi-information LCD display with a boost gauge and oil temp sensor, plus sportier red dials. There are also well-bolstered bucket seats with red stitching that hold you beautifully, and a great flat-bottom wheel.

The cabin looks great actually, with splashes of red, and a clean and simple layout. It’s also put together in proper Japanese style, though some of the plastic feels cheap. There are plenty of storage areas too, including four bottle holders, though the 265-litre boot is pretty small.

Credit to Suzuki for this list of equipment, particularly the safety aids.

We’re hesitant on the value equation since it costs over Ksh2 million, though that’s more on account of how sharp bigger rivals are. But what the MY18 Swift Sport delivers are old school charms with modern packaging and an unashamedly angry design. Winner.