The Q8 is, in the words of its maker, “a fusion of a four-door luxury coupe and a large SUV, with echoes of the Ur-Quattro.” Huh. That’s sure to drive automotive taxonomists up a wall. Even those who know Ur-Quattro refers to the original Quattro coupe from the 1980s.

But take a look at the Q8, the company’s newest truckish thing that goes on sale in October, and you know exactly what it is. It is a BMW X6 analog, a less elephantine Mercedes-Benz GLE coupe, a spiritual successor to the Acura ZDX. It is a German-car fan’s Range Rover Sport.

It is fashion. It is the fashion of sacrificing practicality and utility and efficiency for the sake of style. Stated plainly, it sounds as if we hate its idea, but we don’t necessarily. We like the Mercedes-Benz S-class coupe, which is nearly the length of a minivan but seats only four, and that is way pointless than this Audi.

There are some sacrifices you’ll make when choosing the Q8 over, say, the mechanically similar Q7. First, money. Audi has not yet revealed a price for the Q8, but it surely will start higher than the Q7, since it skips that model’s turbocharged 2.0-liter engine.

It’s highly likely the Q8’s sticker will approach that of an all-wheel-drive BMW X6. If you want to buy a more expensive version of the Audi, wait for the forthcoming SQ8.

Second, you’ll sacrifice seating capacity. To highlight it’s not-a-mommy mobile status. The Q8 has only two rows of seats instead of the Q7’s three. But let’s face it, the Q7’s third row is no great shakes.

The Q8 might well be used by families with small children, but it doesn’t necessarily carry the mark of Destiny upon it.

As a Q8 owner, you might be kicked out of the carpool for not driving a bus that will accommodate an entire kindergarten class. This is a hardship we would be willing to bear.

Third, you’ll give up cargo capacity. Exact specific figures aren’t available for the Q8 yet, but it has somewhere around 10 fewer cubic feet of total cargo space than the Q7, or roughly 15 per cent.

That’s because the Q8’s roof is almost an inch and a half lower and its overall length is 2.6 inches shorter even though it rides on the same wheelbase.

Whether you need as much cargo space as the Q7 is a question only you can answer.

The Q8 compensates with a fat score sheet of positive attributes. Based on the Volkswagen Group’s MLB Evo platform, the Q8 rides on the same basic aluminium-intensive structure and suspension systems as the Q7 and also the Bentley Bentayga, the Lamborghini Urus, and the Porsche Cayenne.

Using the same platform as those high-end performers is like buying a somewhat more modest house in an exceptionally tawny neighbourhood. An added bonus: The Audi looks immeasurably better than the garish Lambo and the awkward Bentley.

Audi never misses a chance to point out that the Ur-Quattro was a design inspiration for the Q8. Okay. We guess. There is the way the taillights are bridged by a long, black centrepiece. There is a slight suggestion of boxy wheel flares. But that’s about as much Ur-Quattro inspiration as there is to be found on the vehicle. Instead, the Q8 has its own look, its own stance.

Designers widened the grille compared to the Q7 and made the headlamps squint. The relatively low roofline makes the Q8 seem exceptionally wide, and it appears to hover over its optional 22-inch wheels (20s and 21s are also available).

The Q8 is less aesthetically adventurous than its two primary competitors, the X6 and the GLE coupe, but it is more handsome by some margin, too. It looks more like a sporty SUV than an oddity for the sake of oddness. 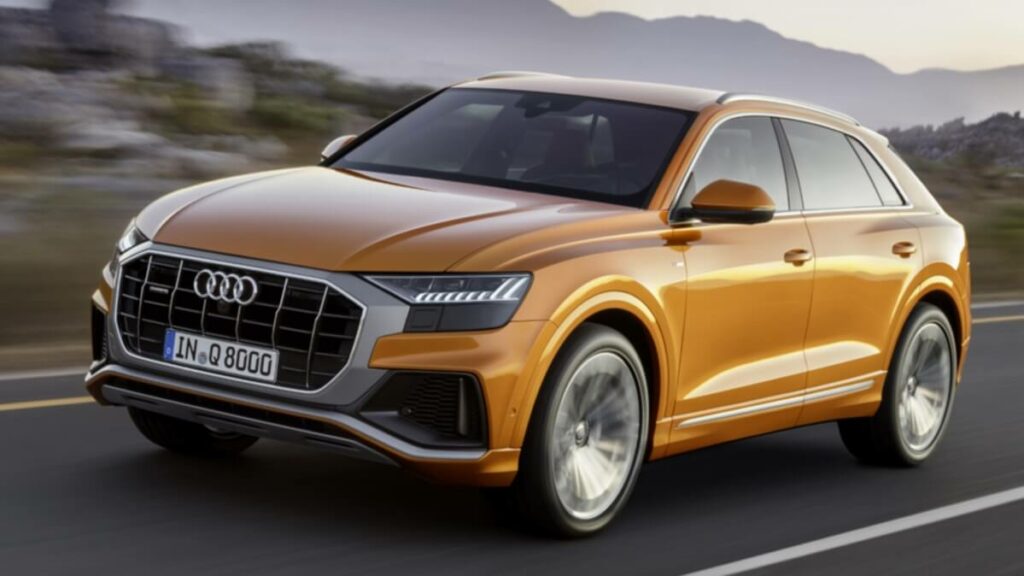 The same could be said for the Q8’s roomy, airy interior. Even the rear-seat passengers will feel as if they have space to stretch out, with more than ample leg- and headroom. Up front—thanks in large part to the two-screen infotainment system also seen in the new A6, A7, and A8—the interior is as sleek and uncluttered as a cleanroom.

We’re not yet entirely convinced two screens are better than one screen and a control knob, and we do sincerely miss the precise knobs and switches that once were the hallmark of an Audi interior.

We’ll need more time with the system to pass judgment on its menu logic, but we will say it responds to commands quite quickly. Anyway, who wants to get bogged down in details? The Q8 is supposed to be about broad strokes and style, right?