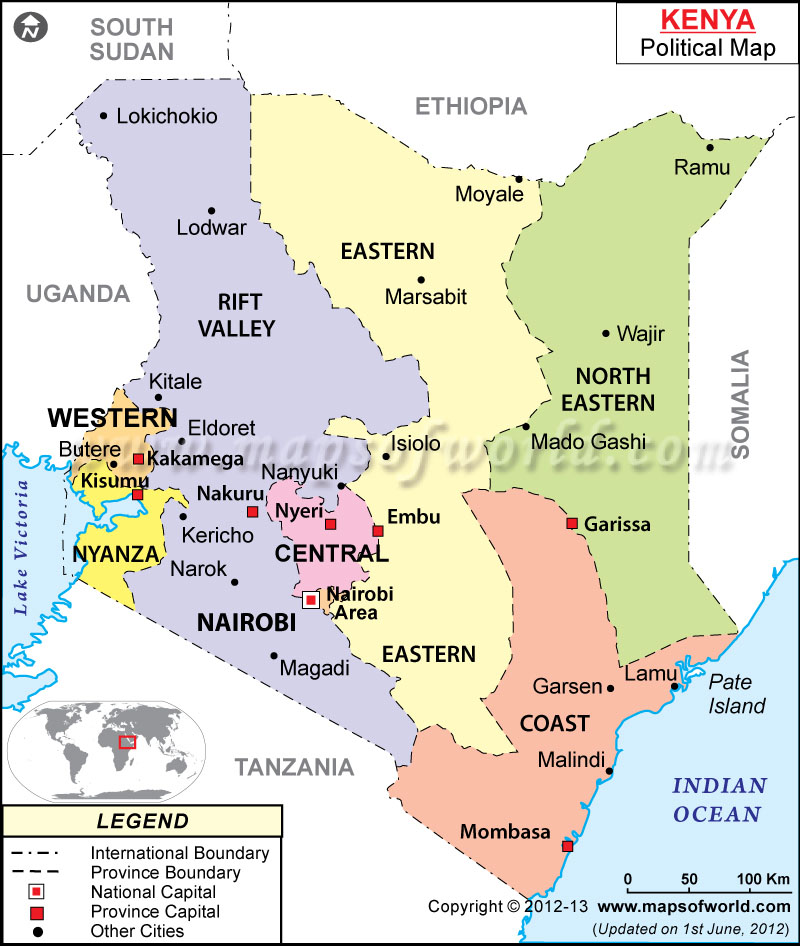 I had shared in the previous post about some Kenya facts, So this is a continuation of the previous article about Kenya and hopes you will enjoy.

Well, as you might know, Kenya is located in the east of Africa and is one of the fast-growing third world economy in Africa. This is some facts about Kenya.

Kenya is as large as France and neighbors Tanzania on the South, Uganda on the West and Ethiopia in the North. About 65 percent of the land is arable, with 15 percent presently under cultivation.

The eastern edge of the country touches the Indian Ocean and home to most Kenya tourism and historical sites. Kenya is famous for being home to Lake Turkana, the cradle of mankind. This region is believed to be the origin of mankind after several archaeologists discovered skulls that date back to millions of years.

There are two seasons in Kenya: the dry season prevails from January to March and September while wet season runs from April to August and again October to December. The entire country enjoys a lot of sunshine throughout the year and temperatures range between 20 and 30 degrees Celsius.

Kenya has an elevated central plateau that varies in height. The southern parts neighboring Tanzania shares Mt. Kilimanjaro – the highest mountain in Africa. The western parts share Mt. Elgon with Uganda and the central parts of the country host Mt. Kenya.

There are several hills around Nairobi; the capital city of Kenya called the Aberdares. The most famous river is river Tana that has its tributaries from the Eastern and the central parts of the country. There are several inland lakes like Lake Naivasha, Lake Nakuru, Elementaita and Lake Magadi. The western parts enjoy the famous Lake Victoria which is the origin of River Nile.

There are several inland lakes like Lake Naivasha, Lake Nakuru, Elementaita and Lake Magadi. The western parts enjoy the famous Lake Victoria which is the origin of River Nile.

The country is covered with several asphalt and tarmac roads and further feeder roads of gravel and dry weather roads. The railway links the country to Uganda from Mombasa. Kenya Airways has an extensive international and domestic flight networks.

We Now boast of The Thika Road Super Highway and the Standard Gauge Railway, the first railway line to be built in Kenya since independence. You can now Book it online and travel between Nairobi and Mombasa, a distance of more than 500Kms in 4 hours.

Local airports include Eldoret, Kisumu, and Mombasa, Wilson airport provides various domestic flights to other areas in the country.

Kenya is a multi-ethnic state with over 40 languages. The national language is Swahili and English is the official language. The main local languages are the Kikuyu, Luo, Kalenjin, and Kamba.

Excursions within Kenya, whether for a day or a month can be organized. Some of the most visited sites include the Maasai Mara for the wildebeest migration view, Lake Nakuru for the flamingos, Lake Victoria for fish and water sports and the golden sandy beaches in Mombasa.

There are hotels that cater for all pockets from the posh Hilton to cheap shelters at the coast. You need a visa to travel to Kenya except for nationals of the East Africa. The currency used is the Kenya Shillings where a dollar can be exchanged for 103.9 Kenyan Shillings.

The people of Kenya are generally very friendly. Although they live in cosmopolitan cities they still love their traditional foods like Pilau (Swahili rice), muthukui (mashed maize), ugali, fish, and roast meat.

Click on this link to learn more about Kenya, its people, culture, geography, economy, and politricks :-).