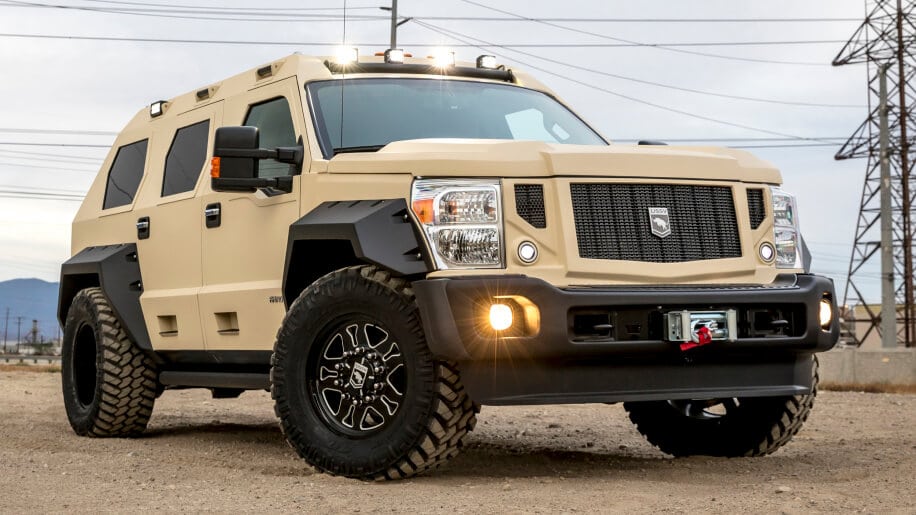 The biggest of course are the Super Duty-based SUVs called Rhino GXs, and USSV has launched an ultra-luxury version called the Rhino GX Executive, which is what you would get if you mashed up a Ford Excursion, that Hummer H2, and a private jet.

The Rhino GX Executive’s highlight is the rear seating area, which has just two power-reclining bucket seats with built-in ottomans. They’re separated by a center armrest with a touchscreen for controlling entertainment.

That entertainment is viewable on a 40-inch TV mounted to a partition between the passenger area and the front seats. But rear occupants can still converse with the driver and front passenger via intercom. The Executive can also be fitted with a sunroof, which looks more like a skylight, and a satellite TV receiver.

The rest of the Rhino GX Executive is pretty much the same as any other Rhino GX. It can be ordered with either a 6.7-liter Power Stroke turbodiesel V8 or a 6.8-liter naturally aspirated V10. All of them are fitted with four-wheel drive and a six-speed automatic. They roll on huge 38-inch tires, too. Only three colors are available inside and out.

Black, tan, and khaki green make up the exterior colors, while inside can be all black leather, or contrasting leather with black and your choice of red or tan. Pricing is not listed by USSV, but ordering a Rhino GX requires a 25 percent deposit for American customers, and a 50 percent deposit for international buyers. So, yeah , you got it there. This machine is for the affluent.